A work by Mårten Spångberg 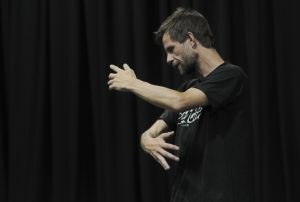 “Powered by Emotion” is a full night solo created and performed by Mårten Spångberg originating from a desire to dance and sing without having access to skill and technical capacity in relationship to the production of, on the one hand territory and on the other, perhaps more tangible, notions of identity and belonging. Starting with an interest between territory and political potentiality the choreographer explores two over- determined artistic materials Walter Verdin’s film of Steve Paxton’s dance to J.S. Bach’s Goldberg Variations and the songs of Buena Vista Social Club. Through the performers inability and nonplussed relation to the material it appears that the spectator is urged to reconsider a politics of aesthetics. What we see and hear both is and isn’t Stave Paxton dancing and Buena Vista Social Club voicing sentimental love. Powered by Emotion is utter artificiality in its most natural form

Mårten Spångberg is a choreographer living and working in Berlin. His interests concern choreography in an expanded field, something that he has approached through experimental practices and creative process in multiplicity of formats and expressions. He has been active on stage as performer and creator since ‘94, and has since ‘99 created his own choreographies, from solos to larger scale works, which has toured internationally. Under the label International Festival he collaborated with the architect Tor Lindstrand he engaged in social and expanded choreography. From 1996 – 2005 Spångberg organized and curated festivals in Sweden and internationally. He initiated the network organization INPEX in 2006, has thorough experience in teaching both theory and practice and was director for the MA program in choreography at the Univ. of Dance in Stockholm 2008 – 2012. In 2011 his first book Spangbergianism was published.